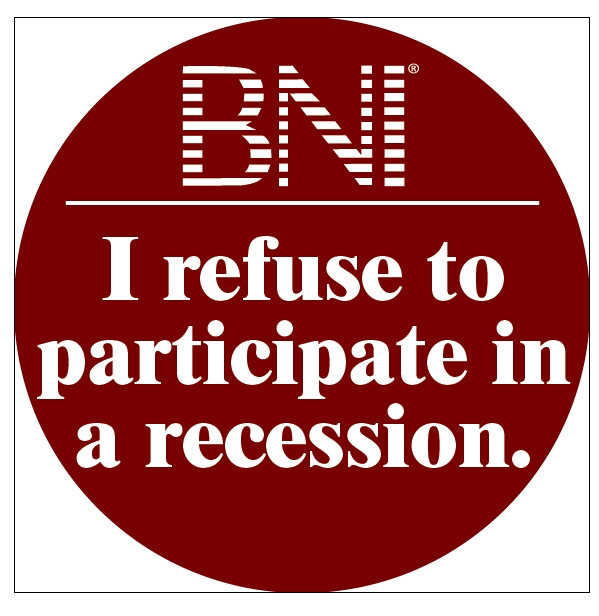 Many economic gurus are saying the “R” word …. recession.For the most part, the U.S. economy has been strong and business has been good for the past decade.However, the economy goes through cycles. Even if we don’t see a full-blown recession, business is slowing for many people.

Unfortunately, every time the economy takes a downturn, the fallout is felt strongly by salespeople, business owners and professionals alike.Successful business professionals learn from the past.For some, this will not be our first recession.

So what did we learn from previous economic downturns?In the early ’90s, right in the middle of a nasty recession, I was at a business mixer in Connecticut meeting many local business professionals.It seemed that everyone was feeling the crunch from the slow economy.Throughout the entire event, the favorite topic of discussion was how bad the economy was and how things were getting worse.The whole affair was depressing because nearly everyone was obsessed with the problems of the economy and its impact on his or her business .

I was introduced to one of the many real estate agents attending.Given the decrease in property values in the state, I was leery of asking this gentleman the standard “How’s business?”question.He shared with me, though, that he was having a great year.Naturally, I was surprised and asked, “You did say you were in real estate, didn’t you?”
“Yes.”
“We are in Connecticut, aren’t we?”
“Yes,” he said with a slight grin.
“And you’re having a good year?”I asked.
“I’m actually having my best year ever!” he said.
“Your best year!”I said in amazement.

After thinking for a moment I asked him, “Is this your first year in real estate?” “No,” he replied with a laugh. “I’ve been in real estate for almost 10 years.”I asked him how he was doing so well, given the conditions of the economy and the stiff competition.He reached into his pocket and pulled out a badge that said:

I AbsolutelyRefuse to Participate in a Recession!

“That’s your secret?”I asked.”You refuse to participate in the recession, so business is booming?”“That’s correct,” he said.”While most of my competitors are crying the blues about how bad business is, I’m out drumming up a ton of business networking with my contacts and generating referrals.”

Considering what he said, I looked around the room and listened in on people for a whileas they complained about how bad business was.While nearly all were commiseratingwith one another, I concluded that very few were actually networking and working on seeking new business.As a result, very little business was actually being accomplished.If you want to do well in business, you must understand that it does absolutely no good to complain to people about tough times.When you complain about how bad business is, half the people you tell don’t care and the other half are glad you’re worse off than they are.

While you cannot control the economy or your competition, you can control your response to the economy.Referrals can keep your business alive and well during an economic downturn.During the last recession, I watched thousands of businesspeople grow and prosper.They were successful because they consciously made the decision to refuse to participate in a recession.They did so by developing their networking skills and learning how to build their business through word of mouth.

Don’t let a bad economy be your excuse for failure.Instead, make it your opportunity to succeed.While others are looking at the problems, those of us looking for opportunities will not only get through a bad economy but will prosper.

53 thoughts on “I Refuse to Participate in a Recession!”