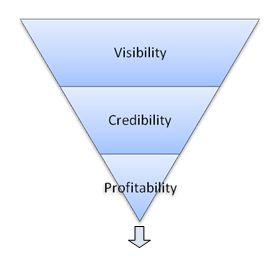 VCP is a referral process, not a sales process. If the majority of your clients aren’t giving you referrals, then you are only at Credibility with your clients, not at Profitability. It’s possible that you can have a lot of Visibility and a lot of Credibility, but NOT have Profitability. Rather than a formula, VCP is a continuum. Before you can refer to someone, you will need to know, like, and trust them.

In this guest video blog, Tiffanie Kellog, a trainer for Asentiv Florida, explores the three stages of the VCP process. Click here to watch.

In short, your goal should be to first enter Visibility with people, then perform activities that will help you build trust and Credibility with them, and finally through time and the strengthening of that relationship, they will most likely pass you consistent referrals in the Profitability stage.  After all, “It’s not who you know, it’s who knows you.”