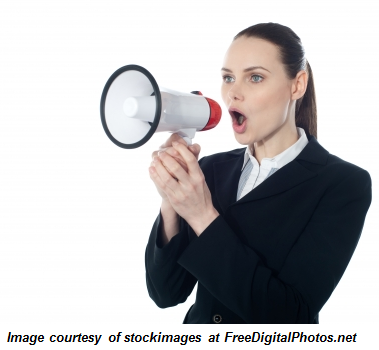 I recently received an unsolicited e-mail message from a man named Chris.  The message stated:

I watched the “video for International Networking Week and… I found it personally offensive and amateurish.  I just thought you would like some feedback.  Consider that when you make your presentation on the Today Show [next week].”

OK, so I should begin by saying – I don’t know Chris.  I’ve never met him and have never talked to him.  Why he would feel compelled to send me such a ‘pleasant’ communication, I can’t fathom.

However, I am thankful to Chris.  I’m thankful because his e-mail message gives me an opportunity to talk a little bit about relationship networking.

Every time you communicate with someone (especially the first time) it is a chance to construct or deconstruct a relationship. This is the first time I’ve ever heard from Chris.  I’d have to say that “first contact” wasn’t very constructive.

I’m not sure what possesses people to send unsolicited criticism to someone they don’t know.  But it seems to be happening more and more in this digital world.  I can’t imagine that Chris would have the chutzpa to say this to someone if he were face-to-face with them.  However, the digital world is ripe with cyber critics who can say what they want and feel more removed from the situation via the internet (it’s possible that being outside striking distance may have something to do with that).

I went back and looked at the “offending” video.  Since Chris didn’t specify what “offended” him, I have no idea what was said that was so offensive to him.  As for “amateurish,” well, I understand that opinions are like noses, everyone has one (that’s the G-Rated version of this saying).  Despite knowing the opinion thing, I thought I should look at the video again closely.  It was shot by a professional videographer.  It had multiple camera angles, professional lighting, and even makeup (maybe that was offensive to Chris?).  I’ve had people say that this video was a bit “artsy” with the cutaways being a little distracting.  Some people didn’t like the switching between black & white and color.  At least those comments were specific and constructive.   But, amateurish – really?  I thought maybe this guy had some amazing website that would put my video to shame so I checked it out.  Ahh, rather than go to the dark side, let’s just say I wouldn’t refer him based on his website.

Here’s the bottom line:  if you want to succeed in life, make your own business better and be sparing in the way you criticize others.

I know, I know, some people just can’t help themselves.  So, if you just can’t hold back and you feel compelled to vent on some other poor unsuspecting soul, consider these four things before you press “send” on your nasty-gram:

No one has ever built a statue to a critic.  It’s easy to tell other people what they are doing wrong.  It’s hard to do the right thing yourself.

Have you ever had this type of experience?  If so, what did you do?  What would you add to my list above?  I’d love to hear your thoughts on this matter.