Last week, Warren Bennis, an icon and mentor, passed away from natural causes at the age of 89.  I studied under Dr. Bennis at USC in the late 80’s.  I hadn’t seen him for many years until 2008 where we reconnected at the story telling event held by movie executive, Peter Guber.

We were sitting at a small round table with about five other people having lunch.  Warren looked at me curiously and said, “we’ve met before haven’t we?”  I told Dr. Bennis that it had been close to 20 years, but he sat on my doctoral committee for the qualifying exams of my program.  That’s when he looked at me and said, “I wasn’t very nice to you was I?”  I was flabbergasted that he would ask me that question.  Now the truth was that he was very, very tough on me.   His critiscims were always professional and insightful, but I always remembered him as just plain tough!

What he said next completely changed my opinion of him.

He said, “I’m sorry.  I really don’t like sitting on doctoral committees because they are a little like boot camp.  You have to put people through these difficult situations to make sure they have what it takes to justify the degree we are about to confer upon them.  It’s necessary, but it’s not really the kind of person I am.”  I acknowledged that he had been tough, but I also told him he was right in his criticisms and redirection.

What I didn’t tell him, and wish I had, was how much I respected him for telling me this now.  As we sat at this event somewhat closer to peers, he could have easily continued with the professor/student relationship.  Instead, he shared with me his inner feelings about the doctoral process we went through and humanized his actions in a way that only increased my respect for him.

We stayed in touch from time to time over the last six years.  He gave me advice when I was on the selection committee for a new President at the University of La Verne, and we met for dinner a couple years ago when he was speaking at the university.   Each time he shared nuggets with me that I will remember throughout my life.

He wrote many books on leadership.  He will always be known for his expertise in that field; however, some of us know him as a truly fine man who made a difference in many people’s lives. 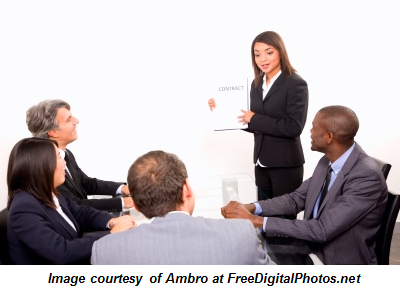 Before television there was radio. Before radio there were books. And before books there were storytellers. No matter what the medium–stone tablets, movies, grocery store tabloids, the internet–the story is central.

A good story stays with people and compels them to share it with others. It’s as true today as it was 2000 years ago–and it’s especially true of success stories. Everyone likes to hear them; everyone likes to have one. Do you see how this aligns perfectly with word-of-mouth marketing, where referrals are based on thousands of individual success stories? You see, every time one networker passes a referral to another, she is telling a story about a need fulfilled successfully or a problem solved effectively.

You can empower your network by writing down success stories about your business so that they won’t be forgotten and they can be told to other people. You also want to encourage your networking partners to swap stories with you so you can each keep the stories on file and use them to help find and refer great business opportunities to each other.

The key is to capture a truly compelling story–one that practically begs to be shared, one that the people in your network would actually have trouble keeping to themselves. The anatomy of a successful word-of-mouth story about your business is quite simple. It has a captivating beginning, an action-packed middle and a happy ending (and, conveniently, it will in most cases naturally outline for your referral partners what your perfect customer looks like). If you’re expecting other people to act on your story and share it, it must be a compelling story–and must have a positive outcome.

Chances are you have several great success stories about your business but, if not several, I’m sure you have at least one. So to start with, I’d like to challenge you to write down your business’s most compelling success story, ask at least one person on your word-of-mouth marketing team to do the same, and then share your stories with each other.

The more stories you share with other people, the more high-quality referrals you’ll get and the more success stories you’ll generate as you continue to network your business.