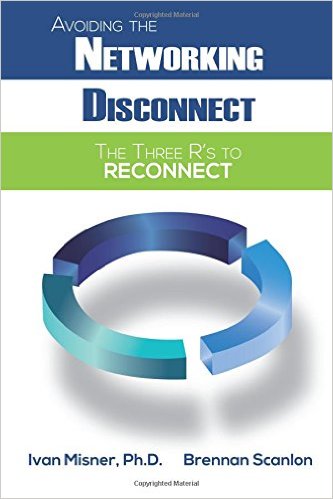 Late September 2015, Avoiding the Networking Disconnect: The Three R’s to Reconnect, my new book co-authored with Brennan Scanlon was released to the public. So many business people walk into a networking event with the intention to sell, and they never are trying to buy. When you’re in a room full of people, all trying to sell their products and services, but nobody is buying, this is essentially the networking disconnect.

Along with explaining this disconnect, and many other topics, Brennan and I also go into the top four reasons most business people avoid networking. To learn more about connecting over disconnecting, be sure to pick up a copy of our book.

Many people fear not being able to contribute in a networking setting. More confident and experienced networkers can intimidate newbies in the crowd. Fear of rejection and an apprehension toward new contacts can also hinder one’s confidence in the networking arena.

These are all mindsets. So many businesspeople identify as an introvert, but are able to get themselves out of their own heads and put themselves out there in the name of building their business.

No matter what business you are in, sometimes it can just feel like there aren’t enough hours in the day. With work, your family, and your friends, do you really have time for any more commitments? Especially something as trivial as networking? You might think no, but the answer is yes, you should! If you want your business to grow, you’ve got to make time for networking.

We all have 24 hours in a day, and seven days in a week. People who seem like they have everything balanced simply don’t have more time in the day than you do, they just prioritize things more than you do. People will always, 100 percent of the time, make the time to do what is important to them. Make networking and growing your business one of those priorities.

Networking is like farming, because it is about cultivating long term relationships to help your business grow. There is some, but minimal, immediate return on your time investment, but any large reward will take a while to begin rolling in. You need to dedicate the time to build your relationships so that your contacts trust you and are more willing to help you. Don’t let impatience get in your way of growing your business.

Despite all the obvious pros to networking, there is still so much misunderstanding about the true gain to be had here. Many believe networking is about selling, which goes right back to our networking disconnect. Networking is something that you do with people, not to people. Walking up to someone and introducing yourself and asking to do business with them is not networking, it is direct selling, plain and simple. Understanding what networking is and how to do it effectively is step one of the journey.

Leave me a comment in the field below if you are guilty of avoiding networking. What are you going to do to turn that around? 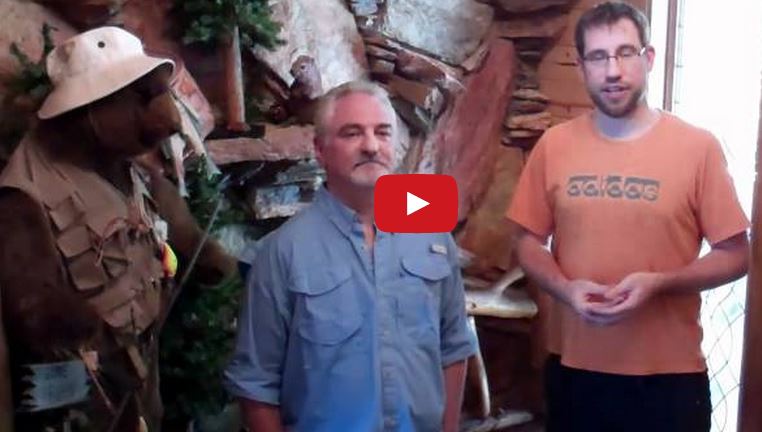 I have been doing video blogs for quite a few years now and a while back it occurred to me that some of the videos I’ve previously posted focus on timeless topics that deserve to be revisited and not buried way back in the video blog archive.  For this reason, I decided to occasionally feature a “classic” video blog from my blog archive and today I am sharing the sixth one–”One Simple Rule to a Winning Approach at Netwoking.” In this video, I talk to UK networking expert Charlie Lawson about the Networking Disconnect which commonly hinders the success of many who attend networking events and mixers.

Charlie explains that the Disconnect can be avoided all together by following one simple rule that will get your networking approach and intent geared in the right direction.  I’ll give you a hint–it involves big fish and coffee. 😉

After watching the video, come back and comment about your experience(s) with the Networking Disconnect (trust me, we’ve all had some experience with it) and what you think about the advice Charlie offers in the video . . . looking forward to hearing from you!

The dark side of the VCP Process® occurs when people get disconnected from what networking is really all about–they’re not carrying out the VCP Process as it is meant to be carried out and that’s when everything goes wrong.

As I mentioned in the video blog I posted last week, Jack Canfield, Gautam Ganglani, and I are currently working together on a book about networking.  Today’s video is, again, one of several short videos I’ll be posting which cover networking topics that we will be focusing on in the book.  These videos are the result of brainstorming sessions for the book and in this particular video, I explain the networking disconnect–the unfortunate occurrence which takes place when everybody comes to a networking event to sell yet nobody comes to buy.

If you have a story relating to the ‘networking disconnect’ which fits the criteria I describe in the video, please visit www.SubmitYourNetworkingStory.com to submit your story for a chance to be published in the upcoming book on networking that Jack Canfield, Gautam Ganglani, and I will be publishing.  Also, I’d love for you to briefly summarize your story in the comment forum below as well.  Thanks in advance for your participation!

In this video, Networking expert Charlie Lawson talks with me about the Networking Disconnect which commonly hinders the success of many who attend networking events and mixers.

Charlie explains that the Disconnect can be avoided all together by following one simple rule that will get your networking approach and intent geared in the right direction.  I’ll give you a hint–it involves big fish and coffee. 😉

After watching the video, come back and comment about your experience(s) with the Networking Disconnect (trust me, we’ve all had some experience with it) and what you think about the advice Charlie offers in the video . . . looking forward to hearing from you!