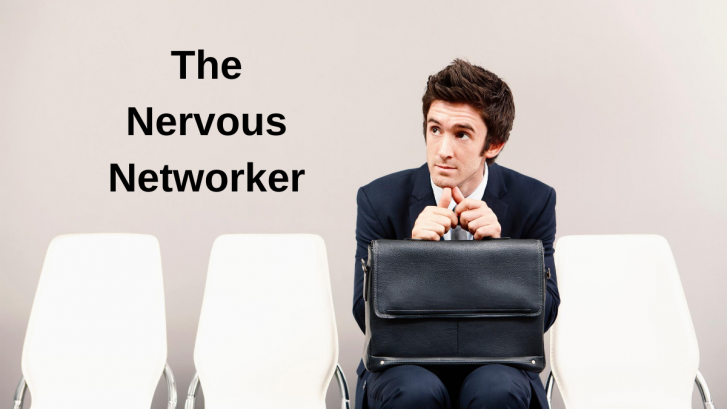 Ultimately, the goal of networking is building relationships with other people at an emotional level to help build a business. It involves meeting and interacting with people you can know and trust. However, the nervous networker is anxious about reaching out to potential contacts and prospects. Feeling comfortable introducing yourself to total strangers is one of the biggest obstacles to successful networking. If you’re a nervous networker you’re not alone. Many people feel a bit daunted about going to a networking event or meeting lots of strangers. The good news is that there are three things you can do which will reduce your anxiety.

In her book, Skills for Success, Dr. Adele Scheele tells about a cocktail party where she met someone hesitant to introduce himself to total strangers. Dr. Scheele suggested that he “consider a different scenario for the evening. That is, consider himself the party’s host instead of its guest.” She asked him if he were the host, wouldn’t he introduce himself to people he didn’t know and then introduce them to each other? Wouldn’t he watch for lulls in conversations, or bring new people over to an already-formed small group?

Now I know that sounds easy… but, when it comes right down to it, actually acting like the host isn’t so simple for many people. Not all individuals are good at “acting” like something they are not. Therefore, I have one important thing to add to this advice: don’t “ACT” like the host, “BE” the host.

Most of the business organizations and groups that you go to have a position that is responsible for meeting visitors. I know it sounds crazy telling someone who is uncomfortable meeting new people at a networking event to be the host. At first, it must sound a little like telling a boxer to “lean into a punch!” however, there is a big difference and it works.

Most people’s fears relating to meeting new people at networking events come from not having a proper context to introduce themselves to others. When you are the host, you don’t feel uncomfortable introducing yourself to someone you don’t know who’s at your party. So the key, in feeling comfortable, is to establish the proper context.

To establish the proper context, I recommend that you volunteer to be an Ambassador, or Visitor Host, at the networking groups you belong to. An Ambassador or Visitor Host is someone who greets all the visitors and introduces them to others. Over time, this type of position will allow you to meet many people, put them together with others, and become an accomplished “gatekeeper.” Helping others connect, meet, and get want they need – will unquestionably help you build your business. Furthermore, it will do it in a way that helps others.

By using this technique, you’ll start to develop excellent networking skills and get great exposure to many business professionals in a short time.

A distinguishing characteristic of self-made millionaires is that they network everywhere. Most importantly, they do it all the time – at business conferences, at the health club, on the golf course, or with the person sitting next to them on a plane. This fact alone should motivate you to place yourself in situations where you can meet new people and do so in a way that you feel comfortable.

It’s not called net-sit, or net-eat, it’s called net-work. If you want to become a better networker, try this technique out. You will be nervous, and the act of networking might feel alien, but pushing yourself can sometimes lead to great things. You will be pleased with the results.