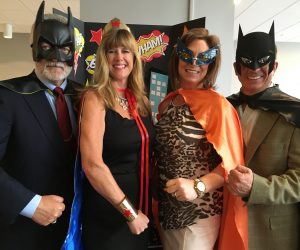 There are many ways that I’ve seen networking partners abuse the relationship, but the following “scary”story is absolutely one of the most glaring examples of this situation.
A woman I know was invited to attend a Halloween costume party of an associate who used to belong to a networking group in which she also participated.  They once had a long-term working relationship, and so out of respect, she decided to dress up and attend.  When she got to the door, she looked through the window and noticed that people were arranged in a semi-circle listening to a presenter in front of an easel board.   When she stepped in, it was very obvious that the “party-goers” were being recruited for a business opportunity.  As resentful as the woman felt, she and other mutual friends found it difficult to remove themselves from the “Halloween party” despite the fact that the only refreshment being served was the company’s pumpkin spice diet shake!
Never, ever mislead your networking partners (for that matter – never mislead anyone).  Trust is everything when you are talking about relationship networking.  Inviting these people to a “Halloween party” which turns out to be a business opportunity is not being honest with the very people with whom you want to build a trusting relationship.
All of these faux pas directly relate to good people skills.  The prevailing theme of this ghostly tale is to treat your referral partners (or potential referral partners) with professionalism and care.  Make sure to respond to them quickly, don’t treat a networking opportunity like a cold-call, and don’t abuse a networking relationship.  Instead, treat your referral partner like you would a #1 client.  Use networking opportunities to meet people and begin the process of developing a genuine relationship.  Lastly, always network in a way that builds credibility and trust – be candid in telling your referral partners what you need and what you’re asking of them.  Do these things and you’ll help to avoid some serious mistakes in relationship networking.
Happy Halloween!