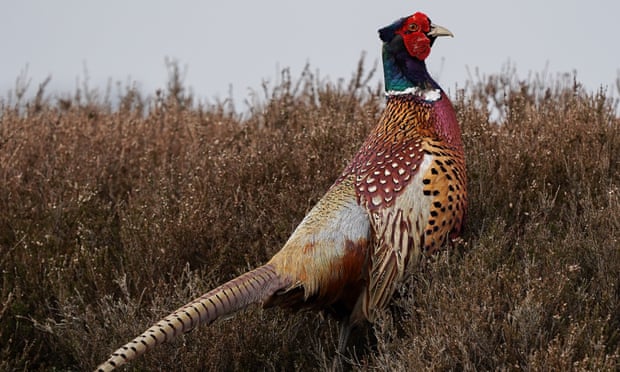 I have asked Greg Davies to write a guest blog for my website. Greg is one of my co-authors of the book, “Infinite Giving“.  He is sharing the topic of “Thanksgiving”, which is a holiday occurring in the USA today. Even though Greg is from Great Britain, and never has celebrated Thanksgiving before, he is truly an expert on the gratitude effect.

This is a bit of a weird one, a blog about Thanksgiving from the co-author of Infinite Giving, the Seven Principles of Givers Gain, which was written by Two Brits and a Yank. Why is that weird, I hear you ask? Well, I can easily discuss the gratitude effect as explained in our book. However, I am firmly in the “Brits” camp and have not attended a single thanksgiving celebration in my entire life (as we don’t celebrate it in the UK). I found myself researching this iconic holiday for the first time. Here is Ivan’s Thanksgiving message from last year. Now at this point, I roll out the elementary school presentation.

In 1621, 90 Native Americans and 53 Pilgrims gave thanks for a successful harvest with a feast that lasted for at least 3 days, etc etc. Fast forward a few hundred years and we have Turkey, Mash, Pumpkin Pie, and the now infamous Black Friday. What I would much rather do, is point out that the “First Thanksgiving” was far from it.

Yes, it is the most referenced and the one that was recounted by attendee Edward Winslow in the American tradition and yes….well….maybe yes, it was the first where Pilgrims and Native Americans sat down and shared a meal (the jury is still out on that one), but the fact is those at the Plymouth Plantation would regularly give thanks for many different gifts that were bestowed upon them. The early Pilgrims would offer days of thanks for blessings such as military victory, end of a drought, recovery of a sick community member, and in this case, a successful harvest. They had built into their culture that when something good happens you need to take time to recognise it and say thank you.

The gratitude effect is not new-age, it’s science.

We cover this in the book, Chapter 11 Principle 7, The Gratitude Effect. There are some wonderful examples in the book of studies that show just how powerful saying “thank you” can be.

Gratitude, like so many other principles of success, is simple, but not easy.

The Pilgrims built gratitude into their religion and daily lives, it became a pillar of their belief and a cornerstone of their community, and for us to adopt this simple act will take a habit defining decision.

The gratitude effect requires a life-long journey of developing our ability to be grateful.

While the above may sound a little heavy, the actual effort involved in giving genuine gratitude is minuscule, but to begin with, it just feels weird. Try crossing your arms the other way, if you normally go left over right, go right over left or vice versa, SEE! IT JUST FEELS WEIRD. This has nothing to do with one way being right and the other wrong, it is just because your neuropathways have formed, and by doing it the other way, you are forging a new path.

That right there is the point, we must choose to forge a new path. We must accept that it may feel strange to begin with, but stick with it and recognise all of the wonderful things that are happening to us and say thank you. Then, a new habit has been formed.

The gratitude effect doesn’t take much effort and costs little or nothing.

I am thankful for the fact that I was asked to write this blog. I am thankful that in the single most challenging year that we as a planet will (hopefully) face in our lifetime, I have forged some of the strongest friendships, met some of the most inspirational people, and been touched by the light of human kindness like I never have been before. I hope that one day, people will give thanks for the difference I have made to them, because the real question is not who’s in our story but whose story are we in? Whose life have we made a difference in? Happy Thanksgiving from England, the original home of the Pilgrims. 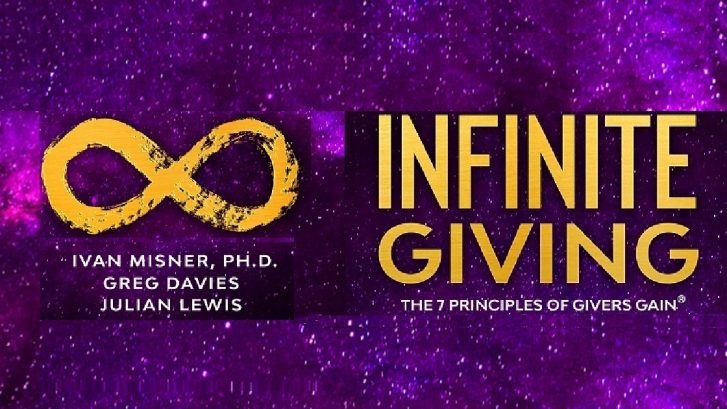 I have a new book, “Infinite Giving”, that was just released this week and is available for purchase on Amazon.

Our book reveals for the very first time, the 7 principles of Givers Gain®  which leads to a life of giving not just for the benefit of others, but most importantly for you as well.  All the while allowing you to protect your time, energy, and resources to ensure you can practice Infinite Giving throughout the world. This law of reciprocity has allowed hundreds of thousands of people to take part in this powerful philosophy while also building a business to support them and those they care about. Givers Gain seeks to imagine a world where giving is a strength, and everybody can create success through Infinite Giving.  The philosophy of Givers Gain® has the potential to change the world. Full stop.

The Seven Principles of Givers Gain®

Two Brits and a Yank make an important decision about the book in this video.

Dr. Ivan Misner is the Founder and Chief Visionary Officer of BNI, the world’s largest business networking organization.  He has written over 25 books including three New York Times bestsellers.

Greg Davies is a corporate trainer, inspirational speaker, and multi-award-winning Director of BNI.  He also has a passion for stories and is known as The StoryFella, using narratives to inspire people and businesses all over the world.

Julian Lewis is a portfolio entrepreneur, with diverse interests including, IT, film making, and business coaching, he is also a multi-award-winning Director of BNI.  He continues to coach, mentor, and consult to businesses globally.

Infinite Giving is available for purchase on Amazon. 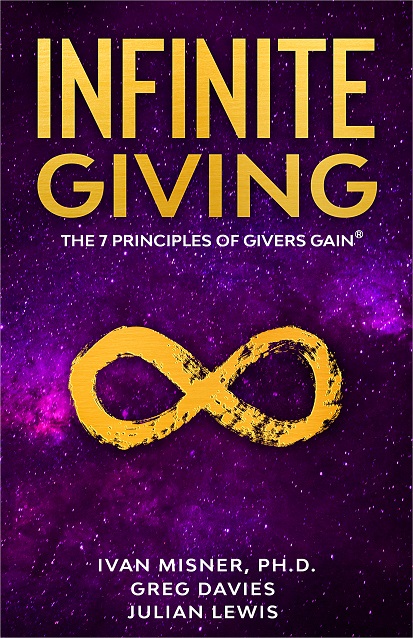 ∞ Order multiple copies of this book for yourself and

∞ The possibilities of who you can be GIVING this book

∞ Please use this link to order your own copy of this

“The perfect balance between developing yourself and impacting others”
Lisa Nichols, Author of Abundance Now

“If you like stories, you’ll love this book. These aren’t just stories that inspire because they show vs. tell; they’re real-life examples from around the world that motivate you to give generously because it’s a shortcut to a meaningful life, successful business, and enduring legacy. Read it and reap.”
Sam Horn, CEO of the Tongue Fu! Training Institute

“These principles will always work if you work the principles”
Jack Canfield, Author of Success Principles and Chicken Soup for the Soul