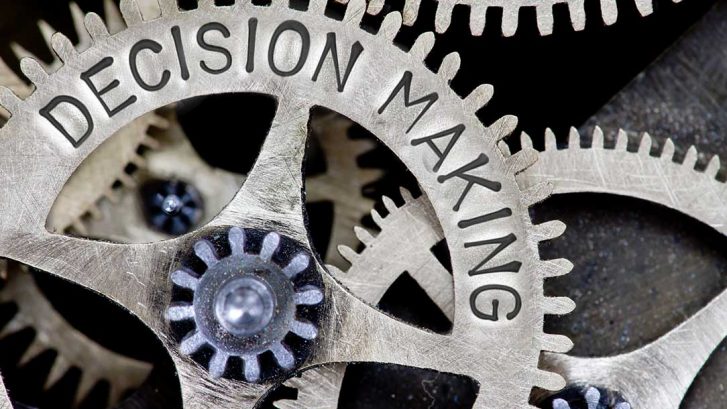 There have been many times in my career where I have struggled with making an important decision.  Do I go left or, do I go right?  Do I say “yes” or, do I say “no?”  I generally tend to look at things logically and try to make good use of the data I have at hand.  But still, there are times that I have continued to be torn about what to do next on some issues.

Over the years, I’ve learned to rely on my intuition when I’m struggling with a particular choice.  To assist with that, I’ve developed two techniques that have helped me make decisions that involve things I’m still unclear about.

Get Out of Your Head

The first one came to me more than twenty years ago.  When my children were young, we were in a Baskin Robbins ice cream store and the kids were completely undecided as to what flavor to get.  We were next in line and there were a lot of people behind us, and I knew that they had to decide soon.  So, I told them all to close their eyes and stick their tongues out and wave it around.  Imagine being in line behind us. There was an adult and three young children standing in a row with their eyes closed and their tongues out waving around in the air.  The other customers must have thought we were crazy.  But interestingly, each one of my children suddenly announced the flavor they wanted.  My hope was that they would get out of their head where all the choices were swirling around in front of them and go with their intuition and choose what their gut was telling them they really wanted. It worked.  They all immediately decided what they wanted (much to the delight of everyone behind us).

Now, full disclosure – when I’m in my office and I can’t make a decision, I do not actually stick my tongue out and wave it around (can you imagine someone walking in my office while I’m doing that?!).  However, I do mentally go there.  Once I have enough information – if I still can’t decide, I sit back and mentally stick my tongue out and wave it around.  That allows me to get in touch with my gut feeling or intuition.  More often than not, I am glad that I did.

Here’s a second technique that I recommend when you can’t decide what to do about something.  Again, get all the information that you can relating to your choices.  Then, grab a coin and assign one choice to heads and another choice to tails.  OK, you’re probably thinking – seriously Ivan, you’re a Ph.D. and you’re going to suggest that I flip a coin?!  Hang on – listen to the rest.  When you flip the coin and get your result, sit back for a moment and check in with that intuition again.  If you feel frustration or dread, that’s the wrong choice.  However, if you feel relief or satisfaction, that’s the choice you should go with regardless of what side the coin landed on. This technique is a way to use something tangible to get in touch with your intuition and cut through the decision-making confusion.

Remember, I still believe you need to look at the data and consider the facts.
I am just suggesting that there are times (and ways) to also take your intuition into consideration.

Your intuition is your inner soul talking to you.  Don’t ignore it, embrace it.