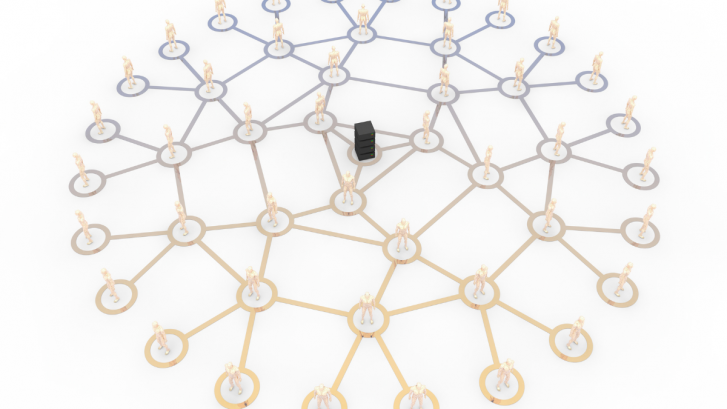 Is your personal network deep or shallow? Chances are, it is a bit of both. A shallow network is where all of the people you meet will start, and where far too many of them will remain. In the course of developing your network, you meet and learn a little about lots of people. However, you don’t go much deeper. You don’t know much more than the superficial things about these people — their names, their jobs, and maybe one or two other small facts about them.

A deep network contains the contacts that you know much more about, and who usually know much more about you. The question is, how strong is the deep part of your personal network? It’s great to have a large network, but if it is a mile wide with tons of people in it with no deep relationships (or very few of them), it will never be powerful.  To maximize the relationship, you want to know as much about that person as possible. You want to find out about their family, their hobbies, their interests, etc.

You need both a wide and a deep network

One of the masters of developing a deep network is entrepreneur, author, and speaker Harvey Mackay. It is truly amazing how much information Harvey asks for — and retains — when he decides you are someone he wants to have in his deep network. When I met him for the first time, I remember having a nice conversation. The second time I had a conversation with him, he started up with the following:

I was flabbergasted. How did he remember all that? The more I spoke to him, the more I realized he must have taken notes. As it turns out, that’s exactly what he does. To help him deepen important relationships faster, he takes careful notes about things important to the people who are important to him. Harvey Mackay carefully catalogs that information and adds to it every time he meets with someone, with things such as children’s and pets’ names, your birthday, the anniversary of your business — tons of information.

Harvey Mackay developed a great method that helps him deepen relationships. To be successful at building a powerful personal network, you need to develop a method that works for you. We live in such a sound-byte society. After a simple, “Hi, good to see you again”, so many people jump right into business without getting to know the other person. That’s too bad because one of the things I’ve found is when you get to know somebody, amazing things happen.

One of the best ways I’ve ever seen for shallow — or casual — business relationships to deepen is through a tool called the GAINS Exchange. Looking back, I remember the first time I introduced the GAINS Exchange into my business. GAINS stands for “Goals, Accomplishments, Interests, Networks, and Skills”. I wrote these five elements on a paper so that two people who meet for the first time — or who had met only briefly and had a shallow relationship — could take turns learning about each other’s GAINS and writing them down.

We tested it to see if this would work. We gave the GAINS sheets to several pairs of networkers to meet and try it out. One meeting stays with me in particular. It was two men who, after being given the form, protested about how the exercise seemed silly. They said they didn’t need it to get to know each other better. We stood our ground and asked them — as a favor — to just test it out. As it turned out, during their conversation where they each shared their Goals, Accomplishments, Interests, Networks, and Skills, they found out they were both soccer coaches for their sons’ soccer teams. All of the sudden, these guys were practically best friends! They shared plays with each other. They even ended up scouting for one another.

Guess what happened? They had known each other casually for a year in a networking group — and had never done business with each other. Within three months of discussing their GAINS, they began passing referrals to each other. This began because they found out they were both soccer coaches, and that made a deeper connection between them that led to trust. If they had continued with their more “shallow” relationship, they may have never passed a single referral. It’s really fun to see two people at a GAINS Exchange that start out learning about each other on a business level by asking each other the following questions:

Then, one of them shares something unique, like an unusual hobby or an unusual place they dream of traveling to see, and conversation just takes off.

If your network is a mile wide and an inch deep, it will never be very powerful. You need a strong and stable network that is both wide and deep. Like the supporting roots of a huge oak tree, some of your referral relationships need to go deeper. You create deeper relationships by learning as much as you can about other people. You want to find out details about their family, their interests, and their goals. Get to know them a little bit better to learn what is important to them.