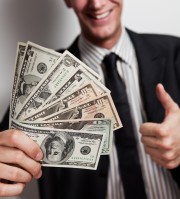 Sometimes good referrals come from sources that you least expect.  Many business people I meet want to network exclusively with CEOs and corporate presidents.  They tell me they don’t want to join most business groups, because top executives aren’t members.  If you’re waiting to find a group exclusively for CEOs and top managers, don’t hold your breath.

Even when you find such a group, it probably won’t help.  You see, they don’t want you!  They’re hiding from you.  Top business executives insulate themselves from those they think might try to sell them products or services.  However, if you develop a word-of-mouth-based business, there’s no problem.  Through word of mouth you can increase your volume of business because you know a hundred people, who know a hundred people, who in turn know a hundred people, and so on.  You are potentially linked to a vast network beyond your own, and you never know who may be in this extended network.

The owner of a drapery business told me about one referral he received in this way.  A friend referred an elderly woman to him because the friend thought that he could help her.  The woman, who was in her late seventies, had sought the help of many drapery companies to no avail.  She wanted to install a pull blind on a small window in the back door of her home; she feared that people going by could look in.  The woman explained that normally her son would take care of this but that he was on an extended business trip.  No area drapery company would help her because it would be expensive to come out and install a small blind like that.  The businessman agreed to help her because she was referred to him by a mutual friend and because she was obviously worried about the situation.

About a month later, the businessman was working in his drapery warehouse/showroom when he noticed an expensive stretch limo pull up in front of his commercial building. Curious, he watched as the chauffeur got out and opened the door for a man dressed in an expensive suit.

The woman, he said, was his mother, and she had raved about how nice the businessman was and how he had helped her when no one else would.  She had instructed her son to use the businessman’s service whenever he could.  The son told him that he had a new, 6,000-square-foot home by the ocean.  He asked the businessman to go out and take measurements, because he wanted to install window coverings throughout the entire house.

The businessman told me that it was the most profitable job he had ever received, and it came from a little, old woman who needed a small blind on her back door.  Ironically, the “great referral” you receive is probably not going to come from a CEO, but from someone who knows a CEO.

An architect in Las Vegas told me about a window washer he met in one of his networking groups.  He said he saw the window washer every week for over nine months before the window washer gave him his first referral.  This one referral, however, was worth over $300,000 to the architect!  You never know where a good referral may come from.  It may come from a little, old lady, or a cab driver, or a window washer.  So don’t ignore the possibilities of the contacts that other people have or can make for you.

Do you have or know of a story about a remarkable referral that came from an unexpected source?  Please share it in the comment forum below–I’d love to hear about it! Thanks!