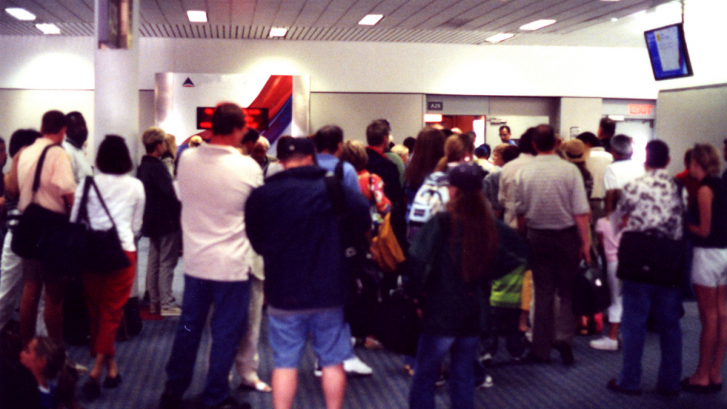 Today’s guest blog about being checked in is by my Personal Assistant, Dana Coyle.

Dr. Misner, the Founder of BNI, wrote an article about how to be mentally present to succeed. It was about someone so engrossed in their cell phone that they almost walked into him. He talked about being fully present in whatever you’re doing rather than just going through the motions.  Be here now – make sure that you are ‘checked in’.

At a busy US airport there was an older gentleman who went to the gate attendant in the boarding area to check in for his flight. That attendant told him that it was a full flight and all of the seats were taken.

He said that they had made the reservation and purchased the tickets two months ago.

She said, “I understand, but it is a full flight and there are no seats.”

He continued to explain that they had a paid reservation and he wanted to check himself and his wife in for the flight.
She replied that “…you have to check in within 24 hours to confirm your seats.”

He said, “We couldn’t check in before. The hotel shuttle brought us to the airport and we just got here. We’ve had the tickets for two months.”

To which she said, “I’m sorry sir. It doesn’t matter when you bought the ticket, it’s when you checked in.”

Be checked in at your BNI meeting

This sometimes happens at BNI chapters.  Members pay for their membership and then just go through the motions. Some are 90-minute members, only thinking about BNI on the day of their meeting, which can lead to fewer referrals, minimal visitors and less business growth.

Then something clicks – a Member has an effective One-to-One and gains a new referral partner, so they schedule more One-to-Ones. Getting to know their fellow members better means they are able to GIVE more referrals. This often leads to gaining more referrals, too, so they get more business. The excitement of successful referral marketing spreads as they tell others and invite them to visit the chapter.

They…get….checked…in.  They realize there is more for them in BNI if they are willing to put in the effort and use the tools available with their membership. The Givers Gain philosophy, put into practice, can be pleasantly contagious as the chapter gains energy and grows, while members see growth in their own businesses, too.

It doesn’t matter when you bought the ticket, it’s when you checked in. Are you fully participating in all that you do? It’s a good reminder in BNI, in business, and in life — Be checked in so you can be here now.