For some time now, we’ve both observed a need to drill down on one of the most important and foundational concepts to networking – The VCP Process®.  Last month, we started a much-anticipated 12-part monthly series of blog posts which addresses this and contains some very timely information for networkers across the globe.  Today, we’re proud to share with you Part 2 of the series.  Enjoy.

Last month, in Part 1 of this series, we introduced you to the moniker – The Networking Nomad™.  Click here to review that blog post.

In short, we described the type of networker who appears to be misinterpreting the very definition of Business Networking.  In fact, The Networking Nomad™ is actually treating networking as if it were a direct sales competition and an exercise in prospecting for new clients.  As a result of this type of behavior, they never stay in a networking group long enough to cultivate long-term referral relationships.

The reason why we’re refreshing your memory is because we don’t want you to forget that ‘perception is reality’ when it comes to networking.  And if you’re simply perceived as someone who focuses on his/her network buying your products or services, then any amount of time you invest in that particular network might not deliver you the Return on Investment (ROI) you expect.

You’ve heard us mention before that the VCP Process® to Networking (Visibility leads to Credibility which in turn leads to Profitability) describes the process of creation, growth, and strengthening of business relationships.  It’s useful for assessing the status of a relationship and where it fits in the process of getting referrals.

The Networking Nomad™ noted above is actually investing most, if not all, of his/her time in something we call pre-Visibility.  They’re not effective at getting consistent referrals because they’ve fallen into a trap. From time to time they run into a prospect they’ve met before, but aren’t really doing much else to deepen that relationship or work towards finding consistent Referral Sources.

Think about it.  Isn’t it better to have 6 referrals from one person in your network over the next 6-12-18 months rather than to have them become a client today?

There are major differences in the Sales Mindset versus the Networking (or more specifically Referral Marketing) Mindset.  For example, in Sales YOU are the center of the process:

With the correct Networking Mindset, the process works WITHOUT YOU. Your well-trained Referral Sources and Referral Partners are spreading YOUR message within THEIR network – while you’re spending your time more effectively.

A successful networker has taken the time to seek and forge strong relationships with Contact Sphere Professionals who aim to serve the same or similar client target market.  Therefore, each new client of theirs can be a new client of yours.

And, that same successful networker is saving valuable time by having their network refer them into the sales process steps ahead of what they could’ve accomplish on their own.

But…you cannot accomplish this if your network perceives you as a PREDATOR versus a PARTNER.  Therein lays the difference between approaching Business Networking with a Sales Mindset versus a Networking Mindset.

At the end of the day, we understand and respect the fact that it’s your choice on which mindset you approach your networking efforts with.  However, understand that we believe your network will perceive you and deliver you the results that reflect your approach.

In closing, we’d like to recommend that you consider reflecting back upon your own networking journey and ask yourself:  “Have you ever perceived someone as exhibiting behaviors of a Predator or a Partner when networking?  If so, what did you observe and what insights did you learn from this observation?” Feel free to share your thoughts in the comments section below and remember, at the end of the day, we’re only human and it’s important to learn from our own as well as other people’s successes and/or mistakes.

We thank you for reading today’s post and extend an invitation to be on the lookout for next month’s contribution to this series – Part 3 called “When Is Too Much Visibility, Well, Too Much ‘Visibility’?”

For some time now, we’ve both observed a need to drill down on one of the most important and foundational concepts to networking – The VCP Process®.  Today begins the much-anticipated 12-part monthly series of blog posts which address this and contain some very timely information for networkers across the globe.  TR and I hope you’ll enjoy the series as much as we enjoyed putting it together.

Let’s restate that word again out loud because it is the essence of why leading sales professionals and small business owners invest their valuable time in Business Networking activities.

We think that probably the best representation of ‘leverage’ as it relates to the topic at hand is J. Paul Getty’s famous quote, “I’d rather have one percent of the efforts of 100 people than 100 percent of my own efforts.”

You see, the difference between the success or failure of someone who is networking as a way of generating revenue is most likely what their perspective of ‘networking’ is.

Story after story is reported to us about people who believe that if they cease going to networking meetings and mixers every single week that their revenue will STOP.  Their perspective is that if they do not maintain a high activity of mixing and mingling with new people that they aren’t ‘networking.’  The truth is that their personal definition of Business Networking appears to be skewed.

Their own description of activities that THEY are performing sounds a lot like selling, doesn’t it?

At its core, Business Networking is “selling through your network, NOT to your network.”  Applying the foundational basics includes building relationships first, amassing trust and credibility in time, and then asking for referrals.  Don’t expect your network to buy from you.  If they do, that’s a bonus – but don’t plan on it or even try to encourage it.  It might actually backfire.

We see it all the time.  People are attracted to the size of the event (i.e., your city or county’s biggest mixer) or the size of the weekly group such as a local BNI Chapter.  These individuals are most likely sales people looking for a Buyer’s Club to help them achieve their quota – nothing more.  Once they pitch their network and a small percentage of people buy from them, they consider that group or network tapped out.  In this instance, you’ll hear these individuals murmuring, “Oh, that networking group isn’t a good one.  I tried it out for 3-4 months, but they don’t pass any referrals.”  They then move on to another networking group and repeat the same self-centered activities (i.e., the rinse and repeat).

Once another 3-4 months rolls by again and they tap out that small percentage of kind souls that purchase from them, it’s back on the meandering trail to wander around and find that next networking group…and the next…and the next.  This is why we’d like to introduce the moniker The Networking Nomad™ — as it fits this type of person and their behavior.

Remember, Business Networking is more about ‘farming’ than it is about ‘hunting.’  It takes time to cultivate relationships.  But once you dedicate the effort, we believe these relationships ultimately allow you to ‘harvest’ referrals for a lifetime.

In closing, we’d like to recommend that you consider reflecting back upon your own networking journey and ask yourself:  “Has my definition of Business Networking evolved through the years?  If so, what events or insights from others influenced this evolution?”

We thank you for reading today’s post and extend an invitation to be on the lookout for next month’s contribution to this series – Part 2 called “Perception IS Reality!”

Also, we highly encourage you to leave your feedback in the comments section below . . .

In this video, TR Garland and I announce the launch of our new, 12-month, BusinessNetworking.com blog series  “Navigating the VCP Process® to Networking,”

TR is not only my good friend, he is one of the top referral marketing trainers in the world and he and I co-authored the #1 Amazon Best-seller Building the Ultimate Network together.  I am really excited to be doing this new blog series with TR because he is in the top 1% across the globe in regard to understanding how to implement referral marketing effectively and this series is going to be a huge resource for people in learning how to understand and  implement the VCP (Visibility, Credibility, Profitability) Process® effectively to produce real, business-boosting results from networking efforts.

Whether you’re a businessperson, an entrepreneur, a novice or seasoned networker, or simply someone who wants to learn, be sure to come back to this site on Monday (2/20/12) which is when we will be posting the first blog in the series!

So what do you think?  Are you as excited about this new series as TR and I are?  Leave us a comment and let us know your thoughts . . . 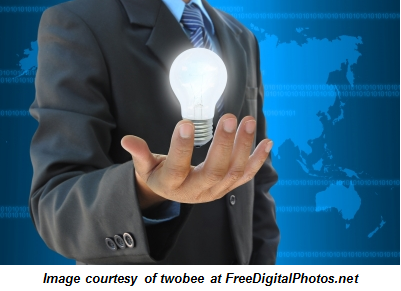 Innovation in our businesses is extremely important. New ideas help us to run our businesses more efficiently, market more effectively, sell with greater success, satisfy customers at higher levels and lead us to greater overall results–if we have a method to put them in place and the discipline to follow through with them.  Innovation gives us competitive advantage in many cases.  We just need to make sure we are not being deceived; we need to understand how to recognize the difference between Innovation and its evil twin, Creativity.

Quick steps to recognize  ‘Innovativity’ over Creativity in a great new idea:

1. Know what your current problem is and what you want as the end result in solving that problem.

2. Confirm that your new idea will help solve that problem DIRECTLY.  Don’t justify that it is a distant cause and effect relationship (e.g., “If I bring in a new target market they will buy more and I will increase my average dollar transaction.” — This simply justifies a non-direct creative idea).

My last words of advice on this topic: Don’t stop being creative!  Always be creative, just know how to use your creativity in the most effective and profitable manner.  Make your creativity spark your innovations so you may continue to build a very profitable and sustaining business.

This wraps up the final part of Frank’s article, “Creativity vs. ‘Innovativity'” and I hope you have all found it to be as enjoyable and beneficial as I found it to be.  Any comments you leave about the article, I’ll be sure to pass on to Frank so please don’t be shy–tell us what you think!