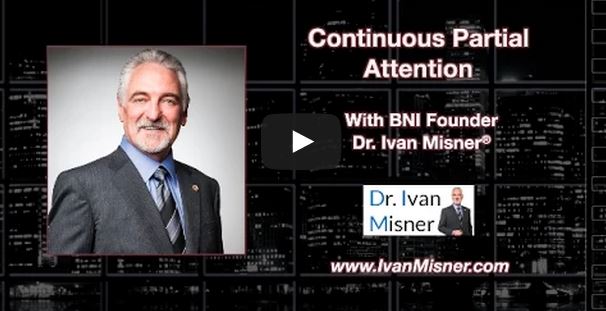 How many times have you been at a networking function and realized that half of the people there are paying more attention to their mobile devices than to the other attendees they showed up to meet and network with?  Worse, have you yourself been guilty of staying so glued to your phone or tablet that you have missed the opportunity to make a powerful connection with the person standing right in front of you?

We are living in a world that is more connected than ever and there are some definite pitfalls in our hyperconnected world as it intersects with our business relationships and our networking.  One of these pitfalls is that hyperconnectivity can lead to a state of what I call ‘continuous partial attention.’

If you have any stories about how falling victim to a state of continuous partial attention has affected you or someone you know, I’d love for you to share your experience in the comment forum below.  Thanks!

I recently had a phone conversation with someone who was asking me about the importance of eye contact when networking.  I answered his question with an interesting story about Richard Branson and I’d like to share that story with you here because I think it demonstrates a point that’s definitely worth remembering.

One of the many intriguing things about Richard Branson is that he has this laser-focus eye contact.  When he is talking to you, he’s not looking to his left, looking to his right, or anywhere else other than directly at you–he gives you his full attention.

I remember talking with Richard, one time in particular, about kids and raising kids.  I was telling him about my son, Trey, who was fifteen at the time and very sharp but not as committed to school as he could be.

Six months later, I saw Richard at a party and introduced him to my son.  Branson remembered who Trey was from our

previous conversation, and I have this photograph of him, where he has this laser eye contact with my son (see picture at right), and he kept that laser eye contact with Trey for three or four minutes straight while he was talking to him. All these people were around, vying for Branson’s attention, but he was completely focused on my son during their conversation. Branson wasn’t intense in terms of his speaking—he was actually very relaxed—but he was impressively intense in his focus. The only person in that room, during that three or four-minute time span, was my son. Here’s a guy who never went to college, and he was telling my son. “Go to college. I spoke to your dad! You can do better. I have faith in you!”

Now, keep in mind, Trey doesn’t get impressed by anybody (or at least, like a typical teenager, he certainly doesn’t make a habit of showing that he’s impressed–if you have teenagers, I’m sure you’re more than used to being responded to with a shrug, a bored expression, and the words “it was okay,” or “yeah, (so and so) was cool, I guess . . .”   ;-)) .  Actually, I don’t think my son even understood who Branson was at the time of their conversation but I asked him afterward, “What did you think of that conversation?”  His very uncharacteristic response was, “That was amazing!”  I’m more than confident that what really did it for Trey, what really impressed him, was how, for those few minutes, he had Branson’s undivided attention.

So, the next time you’re networking with someone and distractions surrounding you are tempting your eyes to stray from the person you’re speaking with, think of Richard Branson and remember to keep a laser focus on the person and conversation at hand–it’s one of the things that will make you a true master.