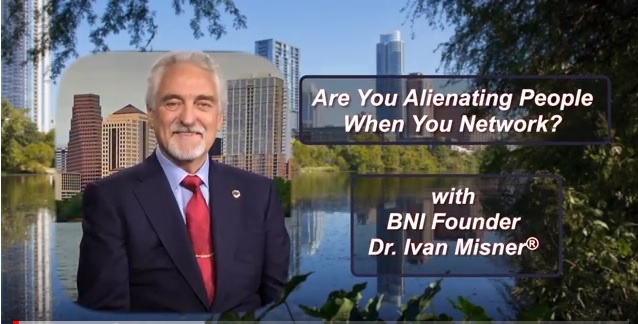 Behavior is key when networking-it makes or breaks the connections, and ultimately, the relationships you build. I’ve spoken before about the differences between approachable or alienating behavior, but I want to take a deeper look into what qualifies behavior as alienating. You may watch this video and suddenly realize that the little nuances you may have passed off as nothing, are actually keeping you from successfully networking.

Here are four ways you may be alienating others when networking:

1. Negative Attitude: Nobody likes a Debbie Downer. Life is hard enough without having to lament about it all the time. If you’re always complaining or focusing on the negative aspects of life, you’re going to turn people off.

2. Closed Off Body Language: There’s a great graphic in the video that will show you what closed off body language looks like, but basically it means standing in a way that only allows for a conversation to happen between two or three people. If you have a bored or scowled look on your face, people won’t want to approach you. Finally, do not cross your arms.

3. Incongruence: Do what you say you’re going to do. Don’t talk a big talk and not back it up. This will lead people to become skeptical of your dependability-which is bad if you’re looking to gain trusted referral partners.

4. Not Acting Interested in People: Be interested more than interesting.  A good networker has two ears and one mouth and uses them proportionately.

If you’re still not sure you’re exhibiting these behaviors

Take a trusted friend or referral partner with you to your next event and ask them to notice if you act in any of the above ways; you can do the same for them. Have an honest conversation afterward about what you both noticed and work out ways to improve your behavior. At the next event, try and be aware of yourself and the reactions you get when you change your behavior.

Are you approachable when it comes to mingling at networking events? You may not know that you are the one getting in your own way when it comes to meeting new people and kindling business relationships. But how can you really tell if you are approachable or alienating? Bring a trusted friend or referral partner with you to your next networking event and observe each other’s body language, the tone of voice and words. Afterward, exchange constructive feedback with the intent of helping each other become better referral partners.

For some time now, we’ve both observed a need to drill down on one of the most important and foundational concepts to networking – The VCP Process®.  Eight months ago, we started a much-anticipated 12-part monthly series of blog posts which addresses this and contains some very timely information for networkers across the globe.  Today, we’re proud to share with you Part 8 of the series.  Enjoy.

ARE YOU APPROACHABLE OR ALIENATING?

In Part 1, Part 2, Part 3 , Part 4, and Part 5 of this series, we introduced and re-introduced the concept and steps of The VCP Process® to Networking for our readers through brief anecdotes, relevant comparisons, and sometimes even humorous situations.  For Parts 6 and 7 we even shared with you video trainings from the both of us

Today, we’d like to share with you a handful of behaviors that you can use on a weekly basis to increase the number of referrals you receive. And, these behaviors are based upon the following question

Are You Approachable or Alienating

Success.  It’s not just a word.  It’s also a very popular magazine as many of you may be familiar with.  And, the Editor of SUCCESS Magazine, Darren Hardy, recently released a book called, “The Compound Effect.”

While it’s an absolutely wonderful book that we recommend you pick up and read in detail, the underlying principle Darren speaks about is that “the little things add up” – just as in networking.  Don’t assume that because some of the tactics and tasks we speak about in this blog series are simple and easy to understand that you shouldn’t make the time to practice them.  Don’t discount the fact that we recommend you practice some of these simple tasks on a weekly basis.  After all, repetition produces RESULTS – especially in networking

With that said, below are some simple things for you to consider based on your Attitude, Body Language, and Congruence when you are evaluating whether or not people perceive YOU as Approachable or Alienating.  And, the reason why we believe this topic is so important is because you may be sending unknown and/or unconscious signals to others when you’re networking that will directly affect the number of referrals you receive and referral partners you make

Attitude – Smile, laugh, and look like you are a pleasant person to talk to.  Although this seems ridiculously simple, you’d be surprised as to how many people forget it, and therefore don’t practice it (see Alienating Behaviors below).

Body Language – Dr. Misner’s book “Networking Like A Pro” introduced the reader to the dynamics of how one stands when conversing called ‘Open 2’s’ and ‘Open 3’s.’  In short, if you are in a conversation with another person or persons, make sure your STANCE allows for others who walk past you to easily join the conversation.  Otherwise, they might not see either one of you as approachable then…or ever.

Congruence – Carry yourself as if every person you meet is the Host of that particular networking event.  If you were at someone’s party, you’d go above and beyond the norm to make them feel good about themselves and the party…wouldn’t you?  I guess what we’re saying here is that you attended the networking event to make new friends and deepen relationships with people you already know, right?  Then, it might be appropriate to act like it.

Attitude – When attending networking events, leave your own problems at the door.  This is true for both your conscious signals as well as your unconscious signals.  For example, rambling on about your rough personal or professional life is unbecoming of a future referral partner.  Listening to challenges in your relationship or that your boss has favorites in the office are not the reasons why OTHERS attend networking events.  If you’re down, don’t bring other people down.  They might avoid you at the next networking event, and the next, and the next.

Body Language – Also introduced in Dr. Misner’s book “Networking Like A Pro” was the idea of how one stands when conversing called ‘Closed 2’s’ and ‘Closed 3’s’.  In short, it is possible to alienate other people who might want to learn more about you at a networking function simply by standing in a “closed off manner” with those who you are currently speaking with.  Your STANCE means everything in your approachability and allows for others who walk past you to easily join the conversation.

Congruence – (or in this case Incongruence) Lacking consistency between what you say and what you do actually makes a big difference in people’s perception of whether or not you are Approachable or Alienating.  If they see consistent inconsistencies, they may believe you are insincere in the reason why you went networking to begin with.

In closing, our focus has been measuring your weekly activities and how they relate to moving people in your network through The VCP Process® all the way from Visibility through Credibility to Profitability.  We believe that today’s part in the series helped remind you of some simple, yet extremely important ideas to keep “top of mind.”  Do you agree?

We thank you for reading today’s post and extend an invitation to be on the lookout for next month’s contribution to this series – Part 9 called “The Fine Line Between Comedy and Competency.”