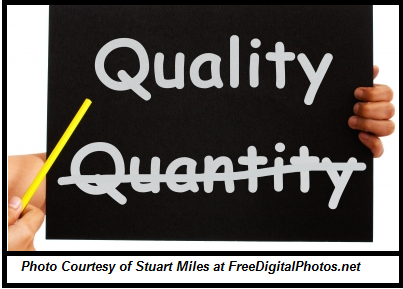 Photo Courtesy of stockimages at FreeDigitalPhotos.net

One of the biggest misconceptions I’m aware of in regard to networking is the notion that it’s an “all you can eat” affair.  In other words, people go to an event, work the room in an effort to meet everyone there, and then judge their success by the number of cards they accumulate.  Although I see a certain superficial logic in that, there’s only one fatal flaw with this kind of thinking:  it assumes that the more people you meet at an event, the more successful your networking efforts are–and that’s simply not the case.  Instead, the quality of the connections you form is much more significant than the quantity of connections you make.

Businesspeople unfamiliar with referral networking sometimes lose track of the fact that networking is the means–not the end–of their business-building activities.  They attend three, four, even five events in a week in a desperate grasp for new business.  The predictable result is that they stay so busy meeting new people that they never have time to follow up and cultivate those relationships–and how can they expect to get that new business from someone they’ve only just met?  As one of these unfortunates remarked to me, “I feel like I’m always doing business but rarely getting anything done.”

I certainly agree that meeting new people is an integral part of networking, but it’s important to remember why we’re doing it in the first place: to develop a professional rapport with individuals that will deepen over time into a trusting relationship that will eventually lead to a mutually beneficial and continuous exchange of referrals.

When meeting someone for the first time, focus on the potential relationship you might form.  As hard as it may be to suppress your business reflexes, at this stage you cannot make it your goal to sell your services or promote your company.  You’re there to get to know a new person.  A friend of mine told me something his dad always said: “You don’t have to sell to friends.”  That’s especially good advice when interacting with new contacts.

This certainly doesn’t mean you’ll never get to sell anything to people you meet while networking; it does, however, mean that you’ll need to employ a different approach.  Networking isn’t about closing business or meeting hordes of new people; it’s about developing relationships in which future business can be closed.  Once you understand that, you’ll stand out from the crowd with everyone you meet.

When you’re networking like a pro and treating new contacts as future referral partners, you’ll absolutely blow away any competitors who still feel compelled to meet as many people as they possibly can.  Why?  Because when you call your contacts back, they’ll actually remember who you are and be willing to meet with you again.

2 thoughts on “Quantity Is Fine, But Quality Is King”