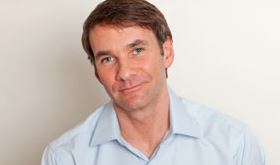 One thought on “Keith Ferrazzi: Build Trust by Breaking Bread”