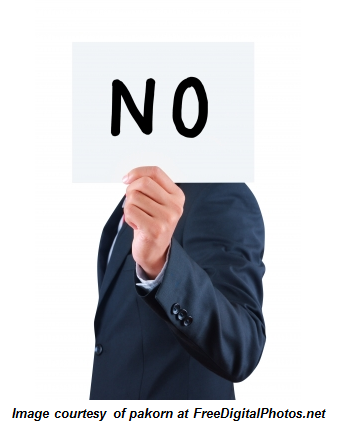 The following article was written by my friend and partner in the Referral Institute, Mike Macedonio. I wanted to share it with you here because it mentions some very important points regarding asking for referrals. After you read the article, I’d really like to hear what you have to say in response, so please feel free to post a comment.

I was recently attending a BNI National Conference and there was a lot of effective networking going on. With the culture of “Givers Gain” there were participants offering to help one another and make connections. On several occasions I was also watching some businesspeople walk up to people who barely knew them and ask to be referred to their valued relationships. I felt a sense of awkwardness in the conversation.

I think what I was actually feeling was deja vu. I’ve been on the receiving end of the “referral ambush” before, when someone I may hardly be in the “Visibility” phase with is asking me to expose my reputation by referring them to one of my valued relationships. In some cases, I was even asked to promote them or their company to my entire database.

During the BNI Conference, there was one participant who approached the main speaker and introduced themself. Shortly into the conversation, they let the speaker know that they understood the speaker knew an internationally known personality and that they would like an introduction to that person in order to pitch their business to him. WOW . . . that was a big ask. So why did it feel inappropriate? Part of the reason is the stage of the referral process, or the VCP Process, that the attendee and speaker were engaged in.

VCP is the acronym Ivan Misner uses for Visibility, Credibility, and Profitability. In the Visibility stage, two people simply know of each other. If both people can state the other’s name and business, that would be considered a qualified Visibility relationship. Credibility is when the relationship between two people has developed and both parties hold a mutual trust for one another. Profitability is the ultimate referral relationship goal. In this stage, both parties are reciprocally referring each other business.

In the situation I observed at the national conference where the conference attendee asked for the referral to the internationally known personality, the attendee was merely in the pre-visibility stage with the speaker. It’s true that the attendee might have mistakenly felt that they were in the credibility phase with the speaker, maybe felt that they knew him, since they had been watching him connect with the audience repeatedly over the course of the three-day event. However, it’s important to always remember that credibility is something that is established over a substantial period of time–not just a few hours, days or weeks. It takes months and, in many cases, years to develop real credibility with someone.

In closing, let me clarify that yes, I do believe that in order to get referrals we need to ask. The key, however, is to know how to ask and when it is appropriate to make the request. When is the right time, you ask? The right time to ask for a referral is when BOTH parties are in the Credibility phase of the referral relationship. Networking should not be a system that ends up alienating your friends and family. Be conscious of the deposits you make into your relationships before you start “writing checks” or, in essence, ASKING for referrals from those you have relationships with.