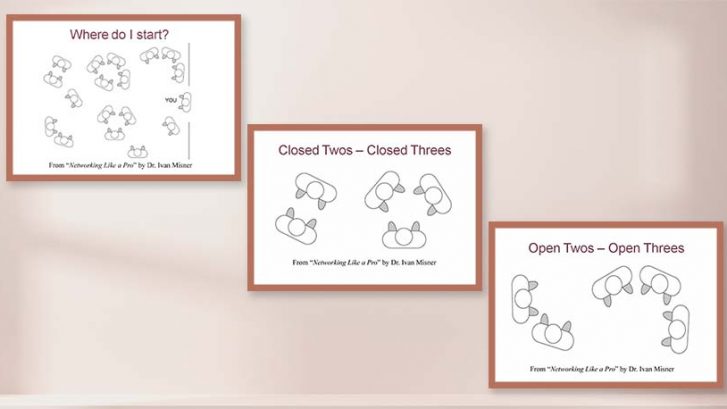 When you are talking to other people at an in-person networking event, how you stand changes who you meet. This is a technique that I have talked about for many years and is a key element of my presentations. It can help with your business networking success.

Sometimes when you walk into a room full of people, you look around and have no idea where to start. You may think, “Who do I walk up to? Who do I talk to?” Some people may even think, “Who do I know? And why did I even come here?”

I wrote about the concepts of Open Twos and Open Threes in my book, Networking Like a Pro, Second Edition. The images shown above are from that book.

The first image is ‘Where do I start?’ It is a view that is looking down at one small corner of the room at a business networking event. There are different groups of people talking to each other, mixing and mingling.

The second image is ‘Closed Twos – Closed Threes’. It represents a view from a balcony, looking down into the room of networkers. A Closed Two is two people facing each other and standing perpendicular while having a conversation. A Closed Three is three people, all facing the center of a triangle shape.

It is difficult to walk up and break into closed conversations, especially if you don’t know any of the people in them.

Look for the Open Groups

I recommend that when you go to networking meetings where you don’t know a lot of people, look for the Open Twos and Open Threes. There will probably be Open Fours and Open Fives, too. It is easy to walk up and introduce yourself to people who are standing in open positions. This is a subtle and effective way to enhance your networking efforts.

If you are a member of a business networking group, encourage your fellow members to stand in Open Twos and Open Threes to make people feel welcome. And then be friendly and inclusive when someone steps into your open group.

Introverts often tell me they have a hard time striking up a conversation at networking events. I recommend that introverted people look for larger open groups, such as an Open Four, Five, or even an Open Six. I know this sounds counterintuitive – why would they want to walk into a larger group?

It’s easy to slide into a larger group without interrupting the conversation and without being noticed right away. Eventually, someone will greet you with, “Hi, nice to meet you. What’s your name?” and then you’ll have a chance to introduce yourself.

It’s a counterintuitive concept that works extremely well. Walking into a larger open group is less abrupt than walking into an Open Two where you will have to speak right away because there are only two others in the conversation.

It is important to understand the concepts of Open Twos and Open Threes to become a better networker. When you have an open stance, you are going to meet a lot of people that you may not have had an opportunity to meet in the past. How you stand WILL change who you meet at business events.