How to Network with the Elephant in the Room - Dr. Ivan Misner® 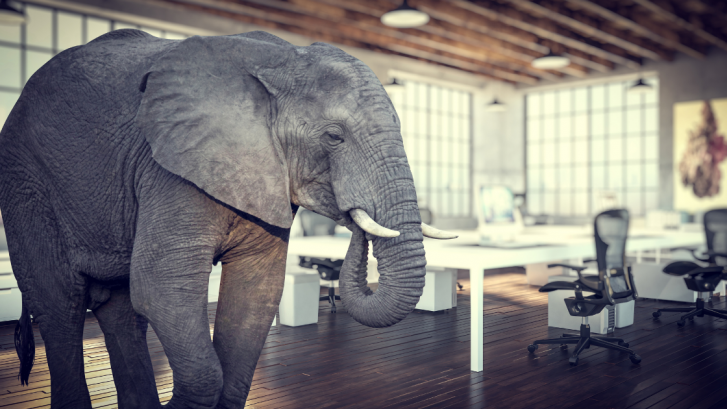 Experienced networkers understand that networking is not always a perfect 100% satisfaction guaranteed activity. A member can sometimes have a problem with another person in their networking group. However, instead of talking with this person to resolve the problem, the member avoids this person due to their personal discomfort, and the unresolved problem can grow into a larger situation. Now, the situation has created “the elephant in the room”, which could cause drama within the networking group.

Drama can occur in any group where wide varieties of people and personalities interact. This is also true in business networking groups that meet weekly for in-person or online meetings. If the physical avoidance between these two members is obvious to others at the networking meeting, the negativity from the situation could be felt by others in the group as “the elephant in the room”, potentially causing drama within the group.

What is “the elephant in the room”?

“The elephant in the room” is defined as “a metaphorical idiom for an enormous topic or controversial issue that is obvious or that everyone knows about but no one mentions or wants to discuss because it makes at least some of them uncomfortable”. The member, due to discomfort, ignored the initial problem with the other person and avoided them during the group meetings. Therefore, the unresolved problem grew into a larger situation that became very obvious to the other members of the networking group. The initial problem between these two members evolved into “the elephant in the room” for the entire networking group. So, how do you tame and remove the elephant? Here are three of the most common situations why a networking group might have “the elephant in the room” and my suggestions for gracefully taming each of them:

The reason for joining a networking group is to build strong relationships with the members to refer business to one another. Normally, this is a win-win for the member receiving the referral because their business grows with a new client, as well as a win for the member who gave the referral because of Givers Gain®. However, a small percentage of referrals may be poor referrals. They take up time but do not result in closed business. When something goes wrong and a member receives a poor referral, this can create the first elephant.

Talk with the member giving you poor referrals.

In most of these situations, nothing was wrong with the actual referral. Usually, the problem was simply caused by miscommunication. Do not perpetuate problems by avoiding open, honest communication with others. Take the time to talk about it in a non-confrontational way. Talking right away will avoid making these awkward situations even worse.

Networking would be so much easier if people were not involved. Although networking is all about building relationships with people, personal disagreements are inevitable and problems occur. Avoiding each other due to discomfort and not talking with each other to resolve the disagreement creates the second elephant.

Focus on the solution rather than on the problem.

You must begin to start focusing on ways to resolve the situation by focusing on solutions. Rather than react, take the time to fully analyze the problem then make a list of possible solutions. When we think of ways to overcome our problems, we are prepared for the next problem down the road. Often, all that is needed is honest and direct communication between the two members to solve the disagreement.

Networking groups tend to attract like-minded people. Sometimes they bring two of their members together for more than just business. Over the years, I have known many couples that dated, fell in love, got married, and started a family together all because they first met at their networking group. On the other hand, this can quickly create the third elephant if the relationship ends badly and the two members remain in the same group after the messy breakup.

Take the higher ground and continue to network.

Given the value of your network, it is worth working through those feelings if you find yourself in a breakup with another member of your networking group. Do not lose your network of valuable referral sources you have built. The more professional you remain following the breakup, the higher your regard will be by your group. Therefore, remember not to talk badly about the other person or discuss the breakup situation with other members of the group.

Whatever the reason, many people involved in business networking may one day face a situation with “the elephant in the room”. Remember not to focus on growing the problem but on growing your business. Do not burn bridges with people in your group by avoiding them or the uncomfortable situation. Instead, talk to them about your concerns. You never know what the future will bring. You might end up being friends and valued referral partners with the former elephant.