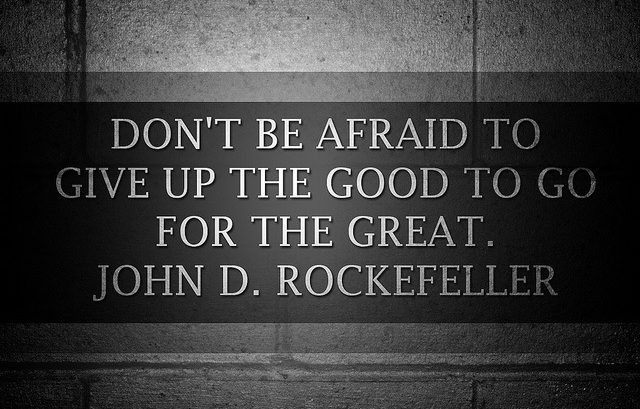 One phrase has been recently rattling around in my mind, “Good is the enemy of great” by Jim Collins

This reminded me of the classic quote, “Don’t be afraid to give up the good to go for the great”,  by John D. Rockefeller.  He believed that the truly ambitious among us have a distaste for comfort. They never settle for good enough, because they know that good enough turns into just okay after a while.

A century later, Jim Collins expands on this concept in his book, “Good to Great: Why Some Companies Make the Leap and Others Don’t”, that complacency is the enemy of being great. According to Jim, “The enemy of great is not bad, the enemy is good.”  He believes that at the heart of truly great companies is a corporate culture that promotes disciplined people to behave in a manner towards greatness.

In any business organization where friendships are critical in order to network effectively, it is sometimes difficult to hold their friends accountable for their performance in the group. Many times, historically successful groups will go through a slow phase and be struggling to grow. When I ask these groups why they believe they are struggling, they tend to answer the same way. It is a variation of one of the following themes: “The group is becoming too lax; we’re not following the system very well.” or, “We’re letting people get away with things we shouldn’t accept.”

Accepting mediocrity within the network is often at the core of a group facing challenges. When groups accept mediocrity, growth and performance stagnate. Making the transition from good to great doesn’t require a high-profile CEO, the latest technology, innovative change management, or even a fine-tuned business strategy. Instead, they are never afraid of giving up the good to go for the great because the good never quite pays off the same way.

Seriously, why accept mediocrity when excellence is an option? People, just like water, tend to seek the path of least resistance. The problem is that the path of least resistance may not be the best. If you expect the best from your fellow members, you will get it. If you expect less than the best from your members … you will get it. Therefore, expect the best. You’ll get better results!

3 thoughts on “Excellence Or Mediocrity: Good Is The Enemy Of Great”