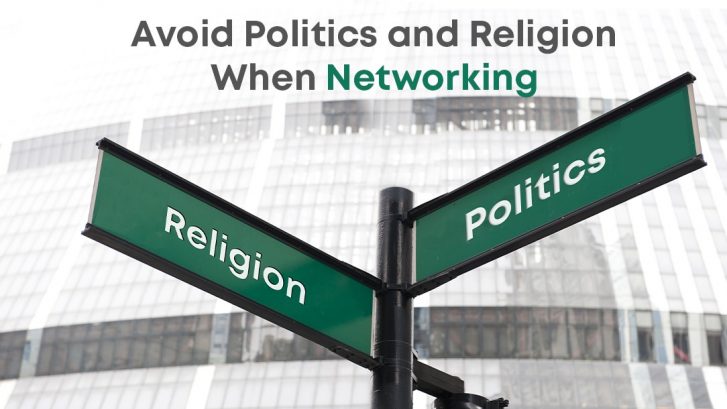 Before I did my graduate work in organizational behavior, I received a bachelor’s degree in political science. As a student, I was very interested in politics — and I still am. Even so, I do not discuss politics while I am networking. Why? Your politics simply aren’t relevant to your professional life and to the goal of building your business. A political discussion in the context of networking is distracting. Even worse, it can be divisive and detrimental to team building.

If you want to build a powerful personal network for business, it is all about collaboration and cooperation. But I have seen political discussions turn many networking groups into a hotbed of anger, anxiety, resentment, and conflict — clearly not a good environment for developing a healthy business network.

The topics we choose to discuss while networking are important. Some people say it’s their right to discuss politics, religion, or anything else they want when they network. I completely agree, but just because it is someone’s right doesn’t mean it is a good idea.

I understand that there are political and religious issues about which we have strong opinions — I certainly have some — but you risk damaging your business relationships by bringing them into the networking conversation.

I have been a registered voter since I was 18 years old. Since that time, I have voted in every major U.S. election as a citizen of the United States. I have also been very active spiritually and I have well-established religious beliefs. However, you don’t, and you won’t, know my political or religious views unless you are a close friend. They are irrelevant to my role as a business leader.

Our networking efforts are most effective when we focus on our business mission and goals. Whether inside your organization, during work-related meetings, or while networking, it is wise to avoid politics and religion. Keep the focus on building strong business relationships for your networking success.

One thought on “Avoid Politics and Religion When Networking”