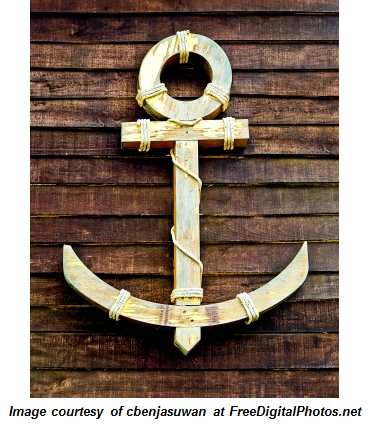 Today’s blog is a unique one because normally you only hear from me; but this entry, which talks about building relationships, was fittingly co-written with my wife Beth, the person in my life with whom I have the strongest relationship.

This summer, our family took a multi-day, small ship tour of the Great Barrier Reef. The first night we noticed that the anchor being used to secure our small ship in the middle of the Coral Sea was quite small compared with the size of the ship.

The second night we were anchored off Hope Island, some very strong winds began to kick up. Our captain started the engines and backed the ship up, letting out more length of chain to the anchor. Curious (and admittedly a bit concerned), we asked him how it was possible for such a small anchor to hold the ship in place with the winds blowing against it so agressively.

“It’s the chain that’s holding the ship, not the anchor,” he informed us. Apparently, after the anchor is lowered, the captain looks to the first mate, who signals from the prow which direction the chain is lying on the bottom of the sea. The captain can then maneuver into the right position and let out the necessary amount of chain to hold the ship according to the particular conditions at that time.

This particular night, with the winds growing stronger, the captain realized that he needed to let out more chain.

Take a look at your networking group and think about the links, or relationships, you have formed with the individual members. How many “links” does your chain have? Do you have strong relationships with all the other members in the group, or are you closely linked with some but disconnected and detached from others for whatever reason?

So how do we go about adding more links (aka building more relationships) so we can let out more chain during times when the economic winds have strengthened against our businesses? We need to get serious about developing stronger relationships with every member of our networking group, even the ones we might not think have the contacts we want, or perhaps are in a business that isn’t exactly symbiotic with ours.

We naturally form relationships with those businesses that are closely related to ours, but what do we do about those members whose businesses are totally out of sync with ours, our members who seem to be unable to provide qualified referrals to us? Try scheduling one-to-one meetings with those members. Spending the time to have one-to-one meetings with each and every member of your group helps you develop a longer and stronger chain of relationships. Each person in your group is one of the links that lengthens that chain.

The wisdom of laying down a longer chain to strengthen the ability of the anchor to hold strong is critical for the success of yournetworking group.

9 thoughts on “Anchor Your Networking Group with Strong Relationships”