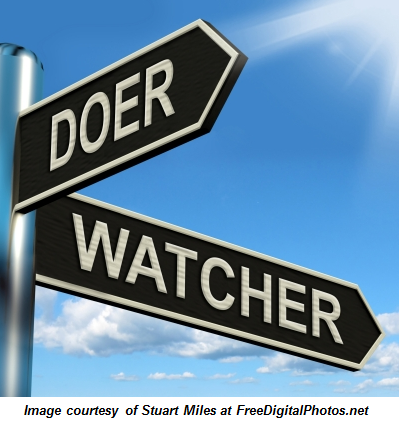 I was talking with a business woman recently who is fairly new to networking and I was explaining that networking is a contact sport–that it requires people to get out there and actively and strategically build relationships.  At one point she asked, “Well, what exactly does that involve? . . . What defines ‘active’ networking?”

Actively networking with others means you invite those people to one or more of the networking organizations you belong to, carry several of their business cards with you all the time, and above all, refer them whenever you have an opportunity to do so.  Active networking also means having a reciprocal relationship with others.

Image courtesy of stockimages at FreeDigitalPhotos.net

We prefer doing business with people who do business with us.  Why give your business to someone who’s not willing to return the favor?  There are hundreds, maybe thousands, of competent, dependable business professionals in your area who provide any given product or service.  They don’t have to buy something from you to reciprocate.  They can join one of your networking groups, carry your business cards, or simply refer you to people looking for your product or service.

Passively networking with others means that you use them as a resource occasionally but for some reason cannot actively network with them.  It may be because they represent a narrow market where you have no way of assisting.  Perhaps they’ve told you they’re not interested in participating in any networking organizations.  Maybe they’re located too far away to refer to them regularly.

1.  Identify members of your information, support, and referral network components.

2.  Spot the voids and weaknesses in your network, and work to improve and fill it with valuable members.

Try pinpointing one person this week to actively and strategically build a relationship with.  What can you do to begin to form a connection with them?  I welcome your questions and comments in the comment forum below.  Thanks!